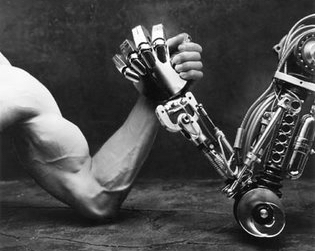 Ever try arguing with a machine? Not likely to win are you? And yet we are facing a new age where we must face the fact that a machine can control your life or at least have a major impact on it. Welcome to the tech war; man versus machine!

Imagine if a machine decides you are no longer needed. Or you are terminated for under performing according to the machine standards.

Now you know what happened to Stephen Normandin of Phoenix,AZ. Normandin, a contract driver for Amazon.com, received an automated email that terminated his job delivering packages as a contract driver. The computers tracking him decided he wasn’t doing his job properly.

According to Normandin Amazon’s computer punished him for obstacles beyond his control that inhibited his deliveries like locked apartment complexes.

Amazon is a company that is big on innovation and technology and now its workers are subject to machine overlords. Machines are often conducting the hiring, rating and firing of millions of people with little or no human oversight. The machines have taken over.

Former CEO Jeff Bezos maybe the blame for allowing the Borg..I mean machines to take control. Amazon has increasingly turned over its human resources operation to the machines. Bezos believes machines can make faster, better and more accurate decisions than people. Amazon is using software that not only to manages its warehouse workers but oversees contract drivers, independent delivery companies and even the performance of its office workers. The machines have taken over.

The machines watch everything. Amazon uses what it calls flex drivers who take packages that weren’t loaded on an Amazon van before the driver leaves. Amazon prides it self on rapid delivery. Customers don’t wait so flex drivers ensure the packages are delivered the same day. But drivers quickly discover the machines are watching and they are merciless.

The machines demand answers! Did the driver get to the delivery station when they said they would? Did the driver complete his or her route in the prescribed window? Did the driver leave a package in full view of porch pirates instead of hiding it behind a planter as requested? Borg…I mean algorithms, scan driver performance data patterns and decide which drivers will get assimilated (darn it I did it again!) I mean get more routes, and which will be terminated. Human input is rare. Drivers do occasionally get emails but most are left to obsess about their ratings, which include four categories: Fantastic, Great, Fair or At Risk.

So you want to argue with a human?

That’ll be $200 please! Yes if a driver decides that he wants to confront a human regarding his termination by one of Bezos’ machines he has to pay. Flex drivers are independent contractors. As such they have little recourse when they believe they’ve been unfairly terminated by the machine. If they want to contest the decision its $200 to talk to a human. Who, by the way, is also monitored by a machine.

When drivers challenge their ratings they often can’t tell if they are arguing with a machine or a person. Responses are impersonal and often use only a first name no name at all. Machines have no personality or friends. Replies rarely address a specific problem or situation.

Machines can and do control everything. You want to log on to a website the machine says “pick out the boats from these pictures.” You want to use your phone the machine demands a code or at least a look at your face. Machine stare at you and decides if you can get on a plane. Its called facial recognition. Facial recognition sees you on the street and decides if you are a wanted criminal and send the police after you. Machines often get it wrong.  So until a human decides the machine was wrong you sit in jail. This happens often that lawmakers are considering a ban on using the technology…until they get better. But you are still subject to the machine overlords.

So you get fired by a machine at Amazon. You go the unemployment office to face another machine! And it says you can’t get benefits.

Unemployment benefit applicants have complained for months about the identity verification service ID.me. The systems uses a combination of biometric information and official documents to confirm that applicants are who they claim to be. All controlled by the machines. Unemployment applicants have reported that ID.me’s facial recognition machine fails to properly identify them. It is a well known fact that facial recognition machines fail to correctly identify people of color, especially black women, at an alarming rate.  And after machines placed a hold on the applications the eligible beneficiaries were forced to wait days or weeks to talk to a human or, as ID.me calls them, a”trusted referee” who could confirm what the machines couldn’t.

Those nice people at ID.me see it differently blaming many rejections poor quality images provided by the applicants. In fact ID.me CEO Blake Hall said; “We are unaware of eligible individuals who have not been able to verify their identity with ID.me,” he said, and “the wait time for a live video chat session right now is less than five minutes and it has been consistently under 30 minutes all week.”

The war rages on!