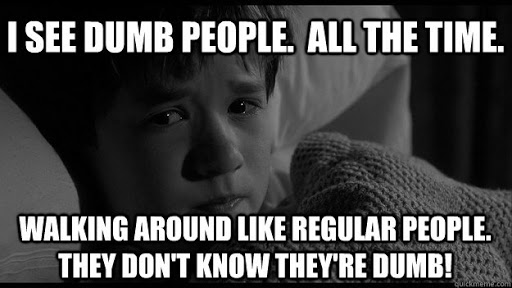 Something is happening to America and it ain’t good. More and more Americans are swallowing what they think is news but is really bad information, manipulated facts, well packaged opinion, commentary and outright lies and just overall bullshit.

Already we have politicians running for office spouting crap from sources such as QAnon and InfoWars. When it comes to misinformation, lies and conspiracy some Americans is bingeing on a buffet of it.

But research has revealed a simple and unmistakable fact. If you depend on social media for news then you are probably dumber than those who don’t.

A report from Pew Research attempts to profile U.S. adults who get their news from largely from social media outlets like Twitter and Facebook. They compared their understanding of current events and political knowledge to those who use other sources, like TV, radio and news publications. The results, according to Pew, is that social media news consumers tend to follow news less closely and end up dumber on several key subjects. Put simply they are not that well informed.

Social media users are not aware of what’s happening. They think they are and that can be as infuriating as it is dangerous to our democracy. For one thing countries like China and Russia depend on these people to peddle misinformation to the masses. Many of these people have no idea that they are pawns in the information war being conducted in cyber space.

According to the Pew Report only 8 percent of “primarily” social media news consumers said they were following the key news story of the 2020 U.S. election “very closely.” That means 92 percent of this group may not be paying attention at all. In comparison with 37 percent of cable TV viewers who said the same, or the 33 percent of print users who also said this. The social media group, on this topic, was closer to the local TV group at 11 percent.

The nation is in the midst of pandemic. President Trump and his minions are sending out bullshit by the shipload. We see Republicans officials refusing to wear masks, selling hydoxychloroquine even when the scientists tell them it useless and refusing to mandate precautions to fight the illness. But guess what? When it comes to the Coronavirus outbreak, only 23 percent of social media news consumers said they were following news of COVID-19 “very closely.” Other groups reported a higher percentage, including those who primarily used cable TV 50 percent, national network TV 50 percent, news websites and apps 44 percent and local TV 32 percent for news. What does that tell you?

But it gets better, or should I say dumber? The Pew survey asked respondents 29 different fact-based questions about news topics from recent days, including those on Trump’s impeachment, the COVID-19 outbreak and others. You guessed it! Social media news hounds scored the lowest!

So would it surprise you to learn these people are also more likely to swallow conspiracy swill? Pew research revealed that social media news consumers are more exposed to fringe conspiracies. Among the conspiracies is the idea that the pandemic was intentionally planned. Twenty-six percent of those who consumed news via social media said they had heard “a lot” about this conspiracy and 81 percent said they had heard at least “a little.” This reflected a significantly higher percentage than all other news platforms. It is also indicative of how such conspiracies can proliferate across social media.

But there are a few facts that need to be understood about the study. First; the research does not definitely state that these users are less aware because they consume social media news. A lot has to do with demographics and here is a powerful revelation; most social media news consumers are young and less educated. Forty-eight percent are between 18-19. Only 26 percent hold a college degree.

Pay for the truth. Perhaps we have to accept the fact that bullshit is free and real news and factual information is a pay service. News and good information, like everything else, is a commodity. It costs money to produce factual reliable journalism. So if you want it you gotta pay for it. Social media news is free.

Journalistic stalwarts like New York Times, the New Yorker, the Washington Post, the New Republic, New York, Harper’s, the New York Review of Books, the Financial Times, and the London Times are all pay news services. And they are not alone. You can find good solid reporting on many websites and in many publications. If you pay.

Now lets look at the free crap. Breitbart, Fox News, the Daily Wire, the Federalist, the Washington Examiner, InfoWars and many others are free. Why? Because, and I am not afraid to say it, they are full of twisted bullshit! And there an equal number left leaning publications that are just as suspect. So the bottom line is that we as a nation have created a news industry. We absorb free news and believe the twisted ideas, thoughts and political angles before we seek the truth by paying for it. Its called a pay wall. Its the wall between you and the truth. Don’t get me wrong, there are plenty of free legitimate news sources. Seek them out.

It doesn’t cost anything to sit down and watched Tucker Carlson or Rachel Maddow spin the news. But it cost money to visit the Wall Street Journal or the New York Times. It costs more than money to find the truth. You have spend time looking up the facts. It costs time to research the topics to form your own opinion based on your own research. But it is easier and cheaper to tune into to Sean Hannity. But if that is your thing please don’t ask yourself if you have an opinion. You do, someone gave it to you.