Cellphone Distraction While Driving on the Rise 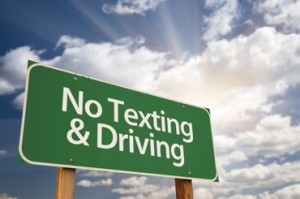 Driving is a complex task that requires your undivided attention. You might be focused on the task but what about other drivers? Accidents related to distracted driving are on the rise and the almighty cell phone is a major cause.

According to the National Safety Council cellphone-related auto accidents in the U.S. rose for the third straight year. Cellphone distractions account for more than one in four  of those accidents. Its frightening to think that according to statistics those numbers may be under-reported.

The Center for Disease Control reported the following impact of distracted driving;

The NSC estimates texting-related crashes rose from 5 percent to 6 percent while those involving talking on phones stayed at 21 percent for a total of 27 percent of the 5.7 million crashes in 2013.

NSC CEO Deborah A.P. Hersman said in a statement that, “While the public understands the risks associated with distracted driving, the data shows the behavior continues. We need better education, laws and enforcement to make our roads safer for everyone.”

Texting seems to have become a part of daily life. New research by psychologists from Penn State Harrisburg found that college students agree that it’s socially unacceptable to text while showering, on the toilet, eating, attending a funeral or while having sex, but do it anyway.

The results of the 70 question survey was published as “2 TXT or not 2 TXT: College students’ reports of when text messaging is social breach,” in the Social Science Journal.

Distracted driving, and operating other vehicles, has been listed as one of the top ten challenges by the National Transportation Safety Board. According to the NTSB, since 2003 distractions from portable electronic devices (PEDs) has been a cause or contributing factor in 11 accident investigations. Those crashes resulted in 259 people injured and 50 people killed. And the NTSB noted it does not investigate the majority of highway crashes.

The National Highway Traffic Safety Administration (NHTSA) reports hundreds of such deaths on our highways in 2012 alone. According to NHTSA, drivers engaging in visual-manual tasks, such as dialing or texting, triple their risk of a crash.

In a 2010 study conducted by Melvin Davis, Ph.D of the Mississippi Urban Research Center black and minority students are more likely to engage in cellphone activities while behind the whee of a car. The study revealed that;

Another study conducted by NHTSA revealed that while the rate of distracted driving is roughly equal among all ethnicities African-Americans were the highest with 43 percent of drivers prone to distraction.

While the cellphone is not only distraction while driving it is number one according to a combined study conducted by the  NHTSA and the Virginia Tech Transportation Institute. The study ranks driver distractions in the following order’

Top 10 Driver Distractions (source: NHTSA-VTTI Study):
1. Using a wireless device, such as a cell phone
2. Talking to and interacting with passengers
3. Reaching for CDs, food, falling objects or other internal distractions
4. Programming radio stations or tinkering with dashboard controls
5. Using an electric razor, applying makeup or other personal hygiene-related actions
6. Unwrapping a burger, opening a canned drink or other movements when eating at the wheel
7. External distractions such as pointing out a funny billboard or pedestrian
8. Talking or singing to oneself
9. Smoking
10. Daydreaming

Being able to multi-task is great skill at work and home but driving a car carries the responsibility being in a constant life or death situation. PUT DOWN THE PHONE! DRIVE THE CAR!